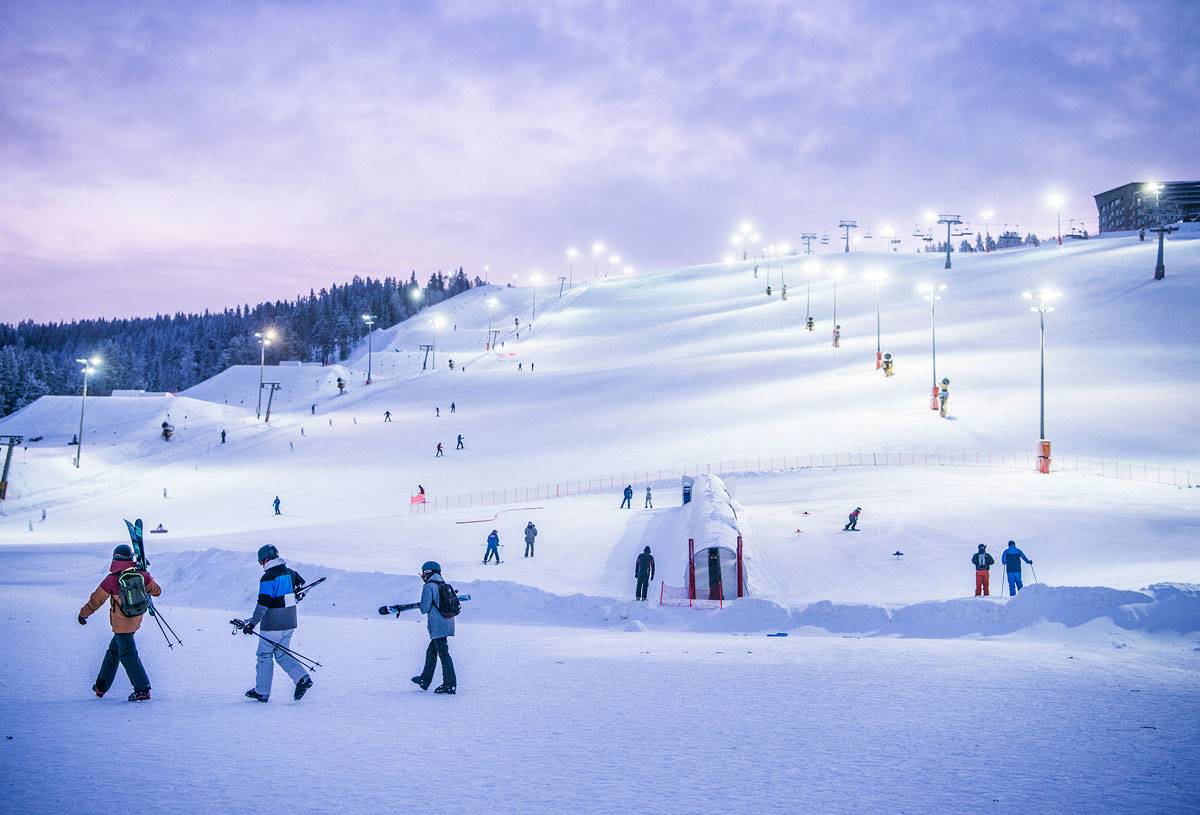 LED slope lighting technology has provided a significant boost to our energy saving efforts. However, at least equally important is the professionalism of the staff in the control rooms. Timely adjustments to slope lighting in accordance with rapidly changing weather conditions is crucial to both slope safety and to energy savings.

We discussed the energy efficiency of slope lighting and the development of lighting systems with Kari Laitinen, the Electrical Supervisor at Levi Ski Resort's.

– I started work at the Levi Ski Resort in 2002. The electrics have kept me busy ever since, as nearly everything in the ski resort uses electricity, from the lifts to the snowmaking machines, Kari tells us.

– With the exception of the breakthrough enabled by LED technology, the basic principles of slope lighting have not changed over the years. We are constantly testing the latest electronic systems, but few of these get implemented, as the weather conditions in the fell are far too demanding for fine electronics.

– Lighting systems familiar from building automation require control centres that house the highly sensitive electronics. Setting those up in the electrical cabinets on the hillside means we would need to heat the current tin-plated cabinets all through the winter for the electronics to endure, we. That would no longer be very energy efficient.

– The area known as Fell Lapland gets strong winds and severe frost, which can thaw quickly and freeze again very suddenly. This poses a variety of challenges for lighting, especially at the tops of the slopes. Above the tree line we get a lot of heavy snow that requires lights to be really durable in order to even stay in place at the ends of the pillars. We can get 15 centimetres of heavy snow in a night. This can cause the pillars themselves to bend under the weight of the snow load. We swipe the tops of the pillars clear of snow several times every season.

– Lights manufacturers have commented that only equipment designed for military use works in these conditions, Kari laughs.

– For now, automated solutions are not able to replace the human eye anyway. For example, twilight switches are incapable of registering fog. Yet, in foggy weather, it is important to illuminate the slopes for safety. With the help of light and shadow, any knolls on the surface of the slope become visible to skiers. The twilight switch only measures the amount of natural light, wherefore it would turn the lights off despite fog, which would jeopardize slope safety.

– This is why the slopes are closely monitored and the lights adjusted from the control rooms at the bottoms of the slopes. Our highly skilled staff controls the lights to ensure that skiing is safe even in rapidly changing conditions. They also make sure that the lights are switched off whenever they are not needed. In this case, too, energy savings rely on the people operating the lights, which is why we train our staff carefully for these tasks, Kari says..

The first LED lights, a total of 20 luminaires, were acquired in the autumn of 2015. However, after this first acquisition, a time-out was necessary. It turned out that the lens technology was still in its infancy. The light scattered and the targeted snow surface was not getting the amount of illumination it required.

– Those first LED lights appeared bright to the eye, but light did not reach all the way to the surface of the snow. These days, we are constantly testing new lights. We mount them on pillars and at night use a lux meter to measure the actual illuminance from the surface of the snow. Despite accurate calculations, it is always necessary to test the lights in practice, in real-life conditions, Kari explains.

– Fortunately, lens technology has evolved, and in the summer of 2018, we replaced the old multi-metal lights on the Front Slopes with a total of 206 LEDs. The light of the new LEDs has performed well in tests, meaning that the light does not scatter and can also be easily directed by turning the lights. 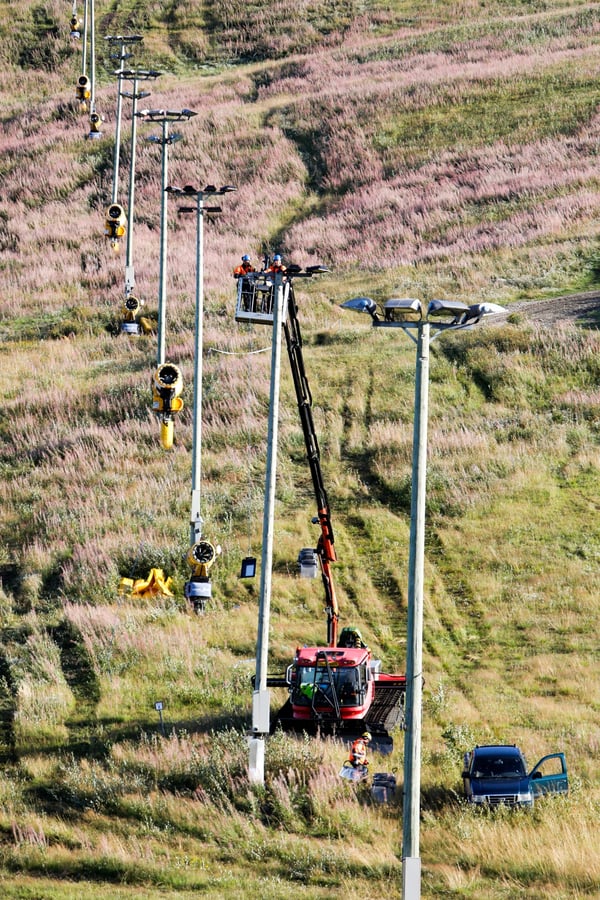 – We have been satisfied with the LED lights on the Front Slopes, and the plan for this summer includes a new lighting line that runs on the right side of West Point's state-of-the-art chairlift. About 50 lights will be needed. We are testing the best lighting fixtures from three different suppliers. We also still have some of the lights used in the Front Slopes in stock, so we may use those first.

LEDS TO LIGHT UP THE WORLD CUP SLOPE IN THE FUTURE

LED technology has developed at a rapid pace, and already provides such illumination power that we are exploring the possibility of introducing LEDs into the Levi Black slope, where the World Alpine Cup is held every year.

– On a race slope, a much wider area than usual needs to be illuminated and very effectively. The traditional multi-metal luminaires we use on ordinary slopes are 400 W. On the wider race slope, we use two sets of lights: ordinary 1000-watt slope lights and 2000-watt competition lights. The latter are only used during competitions and from time to time to defrost the snow that’s gathered on top of the pillars, Kari says.

– The plan for the competition slope is to first replace the 1000-watt slope lights that are in continuous use. The right time to replace the lights, is when they reach the end of their five-year life cycle, at which point their light output drops dramatically.

– Multi-metal lights have always had some loss to their illumination power. The surface of the snow gets about 70% of the amount of lux promised by the manufacturer. With LEDs, it is possible to delimit the illuminated area much more precisely, whereby the light intensity is obtained on the snow surface. The efficiency ratio of LED lights is significantly better. At the same time, LED technology also brings completely new benefits. For example, the LED lights we are planning to use for the race slope also offer the possibility of creating special patterns and effects..

SWITCHING TO LEDS IS ALSO ECONOMICAL

Although LEDs are still 2 to 3 times more expensive than traditional multi-metal slope lights, they have a significantly longer life cycle, better output and significantly lower energy consumption. For example, the return on investment for the LED lights in the Front Slopes is just over 2 years thanks to the electricity savings. At the same time, we gain further savings through the reduction of labour that replacing old light bulbs requires.

– All in all, we save about 269,280 kWh on the Front Slopes during one season. We have also replaced the area lighting around the Gondola with LEDs. That saves about 18,668 kWh in a season. Most of our indoor halls are also LED-illuminated now. As a result, visibility is better for the people who work in the halls and fire safety has improved when compared to the use of traditional fluorescent tube lights, says Kari.

Levi Ski Resort has 26 illuminated slopes that also use artificial snowmaking. In addition, the ski resort has 21 slopes that operate solely on natural light and snow.

Did you know that Levi is the first ISO 14001 certified ski resort in the Nordic countries? Learn more about the 8 most impactful areas of our environmental efforts, the development of resource and energy efficiency in snowmaking and waste sorting.

Be sure to also share your own environmental deeds with us under the #sustainablelevi tag in social media!