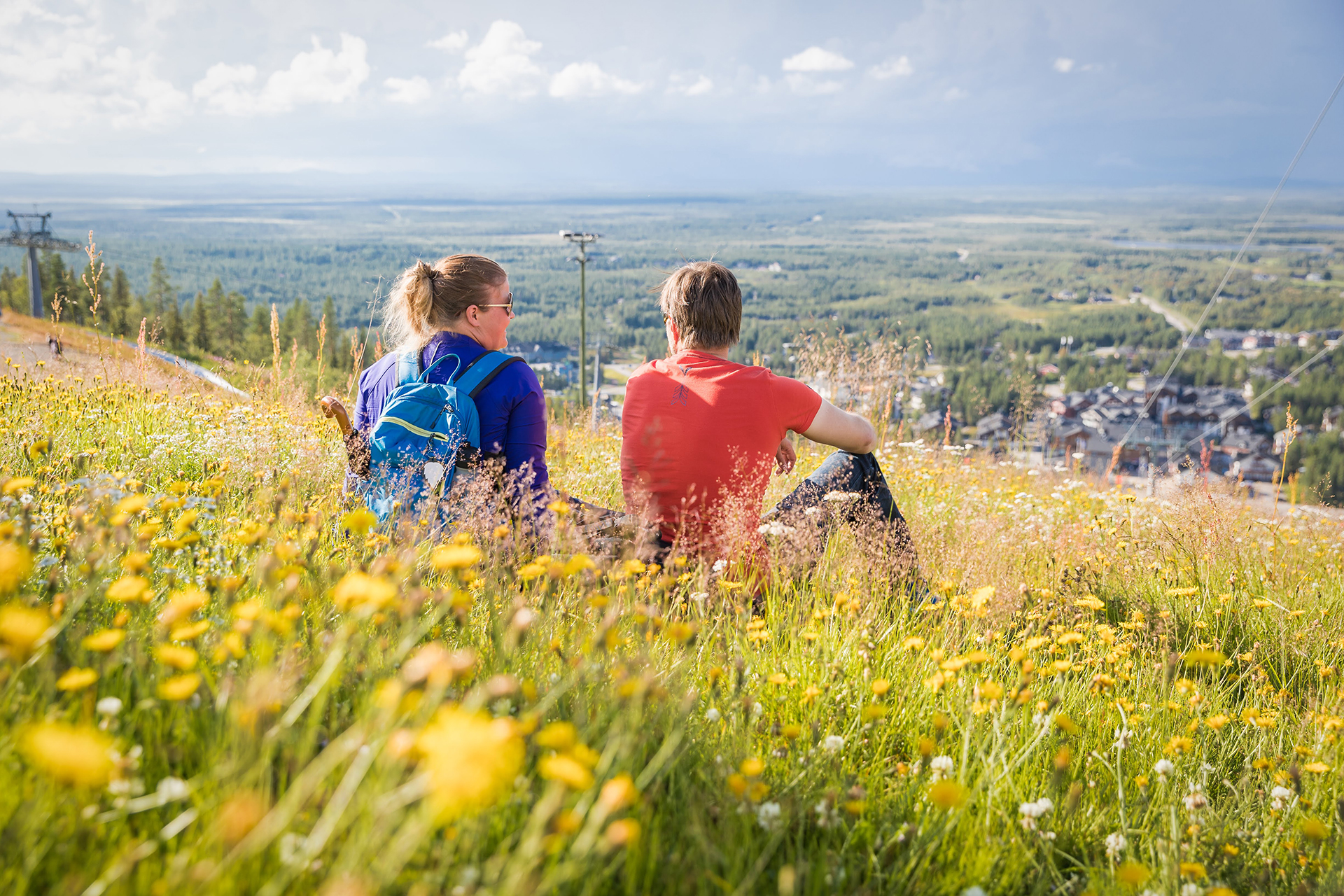 We are exceptionally closed on 1.10.2021, Gondola Restaurant serves as usual. We apologize for any inconvenience this may cause.

Did you know that Levi Ski Resort is the first ski resort in the Nordics to have obtained the ISO 14001 environmental certificate?

The international ISO 14001 environment certification, awarded to us in 2018, is a recognition to our systematic efforts to preserve arctic nature. Granted and monitored by an external auditor, the certificate requires continued development activities from us in the future as well as calculations into the environmental impacts of the different areas of our business..

The infographic below showcases the results of our environmental efforts thus far. Our goal is to only use renewable power sources, such as thermal energy. 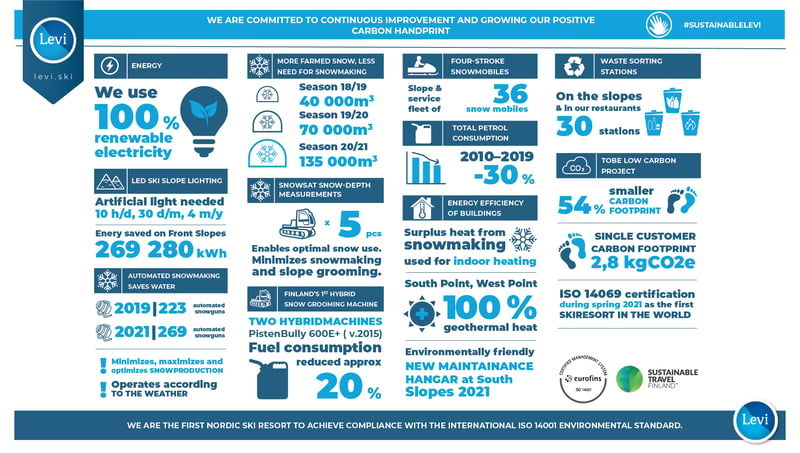 So what is our positive carbon handprint made of? Let’s take a closer look at the 8 most significant areas of our environmental efforts.

We minimise energy use in the slopes, by LED and automated lighting. We have changed operating hours to 9.30 am – 7 pm and thus gained an extra half an hour of natural light in the mornings and reduced the need for artificial lighting in the evenings by a full hour. 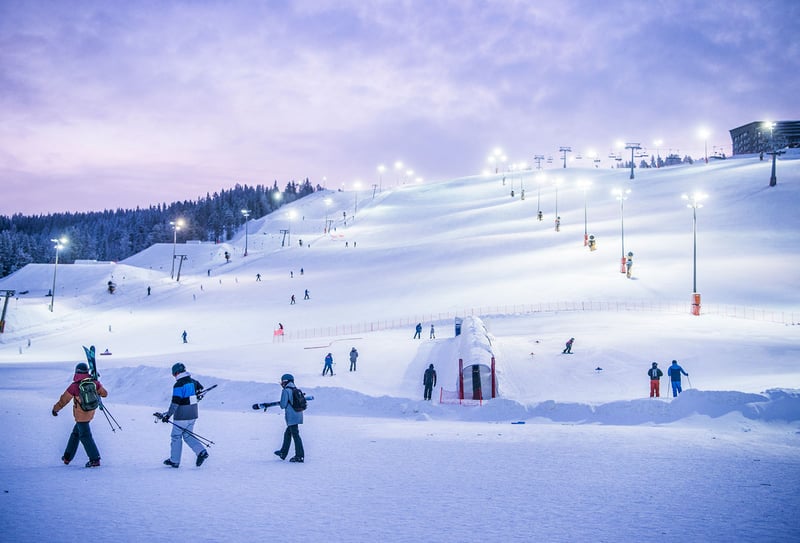 For example, on the Front Slopes, during the darkest winter season the need for artificial lighting is 10 hours per day for 30 days a month, for 4 months in a year. This means that with the LED lights we save 269,280 kWh of energy every year. If an average detached house consumes 22,000 kWh per year, the LEDs on the Front Slope save an amount that equals the yearly consumption of 12+ detached houses.

We have also changed other areas and outdoor lights, as well as indoor and outdoor lights in the repair shop areas to LEDs. These counted together amount to energy savings of 64,478 kWh. The total saved energy in illumination is 333,758 kWh.

We have plans to switch to LEDs the illumination of Levi West and West Slopes during the season 2020/2021.

The automation of our extensive snowmaking system saves energy and optimizes water consumption (m3) in relation to the slope surface area (m2).

Our automated snow guns are operational only when the weather conditions are favorable. The automation relies on data obtained from the ski resort’s weather station and on the snow depth measurements collected by the SnowSat system in the slope machines that operate around the different slopes. The snow guns themselves are equipped with weather sensors. Compared to traditional manually operated snow guns, which need to be transported to the site and switched on, the automated guns use water only when and where it is beneficial. The new automated guns do not require transportation on a snowmobile or slope machine, bringing fuel savings as well. 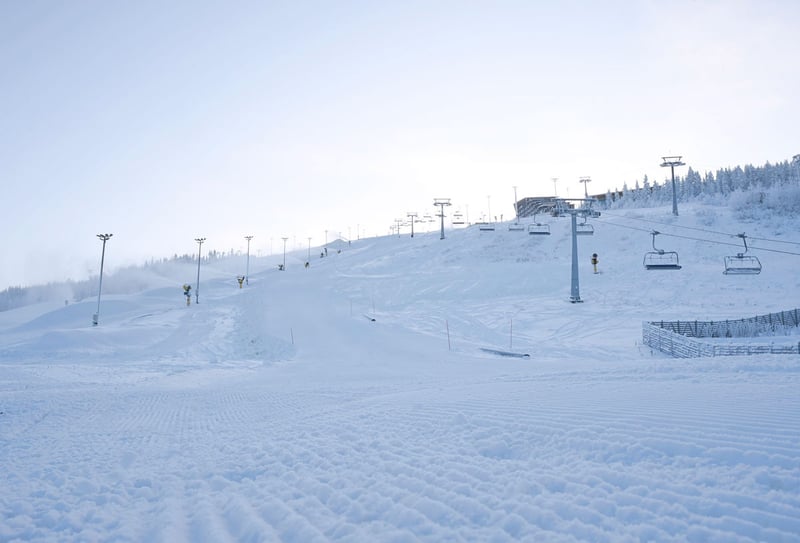 Back in 2014, the efficiency ratio of snowmaking was at 1,014. Thanks to automated guns the figure climbed to 0,759 in 2017-2018. We already have 223 automated snow guns, and the investments will be continued. We plan to acquire approximately 25 new automated guns in 2020 to replace manually operated guns in the Levi West slope area.

In relation to the SnowSat system’s snow depth measurements, we are extending the secure wireless network to cover different slope areas in order to provide as accurate and timely data on snow depth as possible. Until now, they data has been relayed only when the machines return to the reach of the maintenance hall's wireless network.

Snow that is stored during the summer, tightly packed under thermal insulation, significantly reduces the amount of water needed for making new snow. On the World Cup slope, snow has been preserved for three years in a row now. In the 2018/2019 season, the amount of farmed snow was increased from 40,000 cubic meters to 70,000 cubic meters, when snow farming was extended to include the Front Slopes.

We are investing in new protective covers representing the latest preservation technology. The functionality will be tested this summer with an additional 20,000 cubic meters of snow. All in all, we will be farming a total of 90,000 cubic meters of snow this year. Snow loss during the warm season is expected to be reduced from just over 30 percent to around 5 percent with the new coverings. 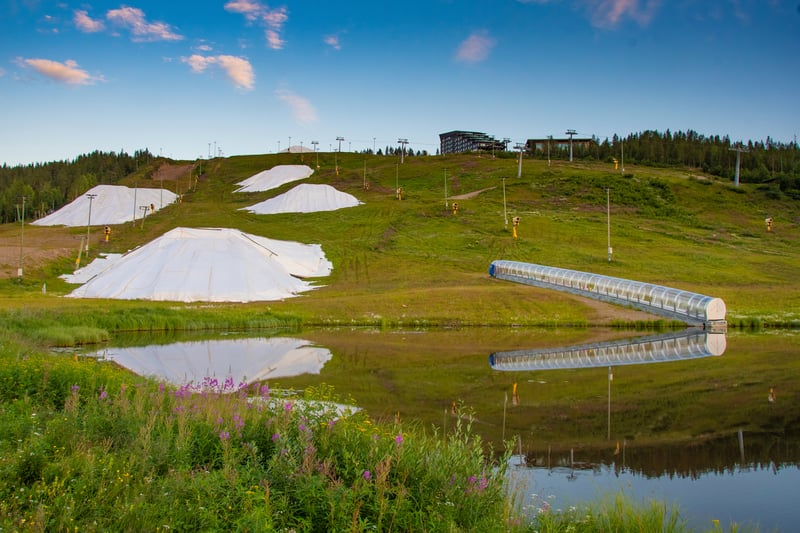 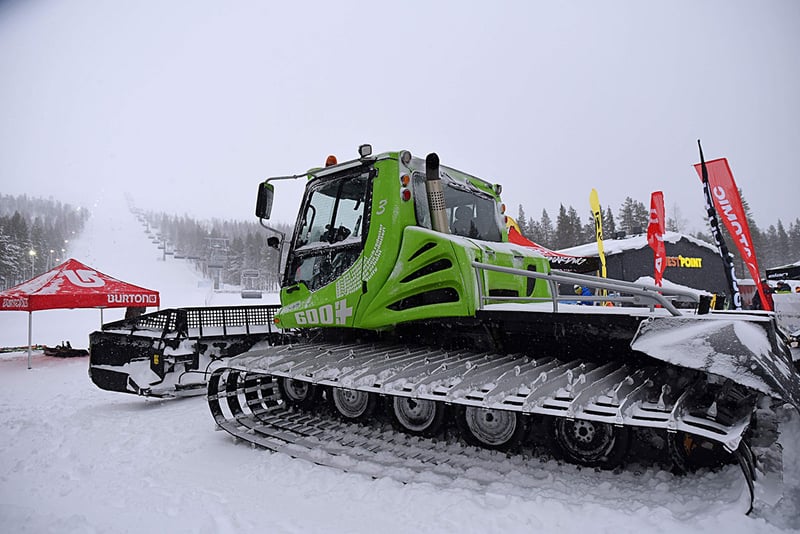 Our fleet of 30 snowmobiles, used for slope and maintenance operations as well as first aid, consist entirely of new, energy-efficient four-stroke snowmobiles, which save fuel significantly.

We train our staff in economical driving and monitor machine-specific fuel consumption.

5. WASTE SORTING AT THE SKI RESORT

In addition to sorting our own waste, we encourage customers to sort waste, such as candy wrappers and beverage cans, at waste collection points located around the slopes and the restaurants.

The restaurants have three sorting points and there are another 27 sorting points around the ski areas, all of which offer sorting for combustible waste, bottles and cans, as well as plastics. 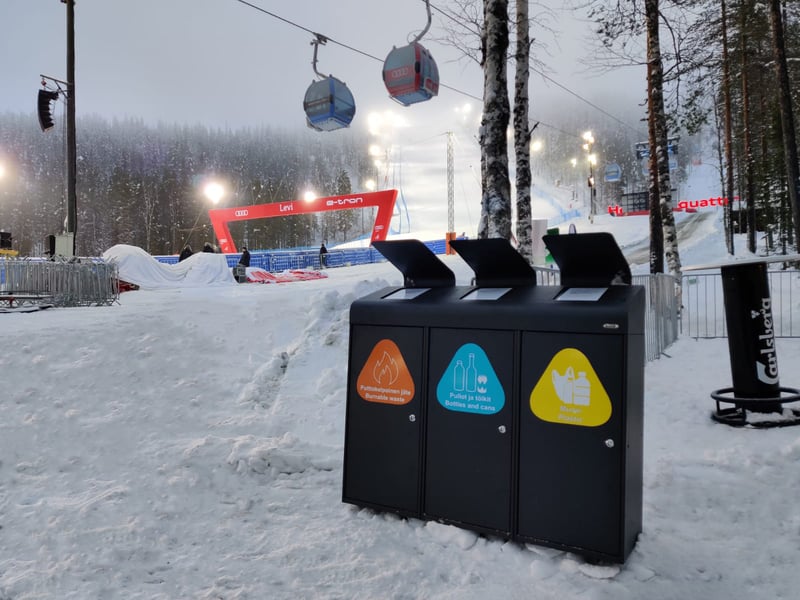 During the 2018/2019 season, 15 waste collection points were in use. The number was doubled for the 2019/2020 season to 30 points. At the same time, we designed new waste sorting symbols, which have been introduced throughout the Levi tourist area.

Waste has been sorted at Levi Ski Resort for a long time, but we are constantly making improvements. All waste is sorted into a total of 18 different fractions with the collaboration of seven different operators.

Sorting is something each customer and visitor can impact. Let's work together to ensure that waste and rubbish get properly sorted.

We use geothermal and surplus heating for our properties. Surplus heat is collected from snow gun compressors and transferred into the geothermal piping. Currently, our South Point premises use 95% geothermal heat, and we are developing heating solutions for the Gondola Building that utilize surplus heat. We also plan to start utilizing solar energy in the near future. 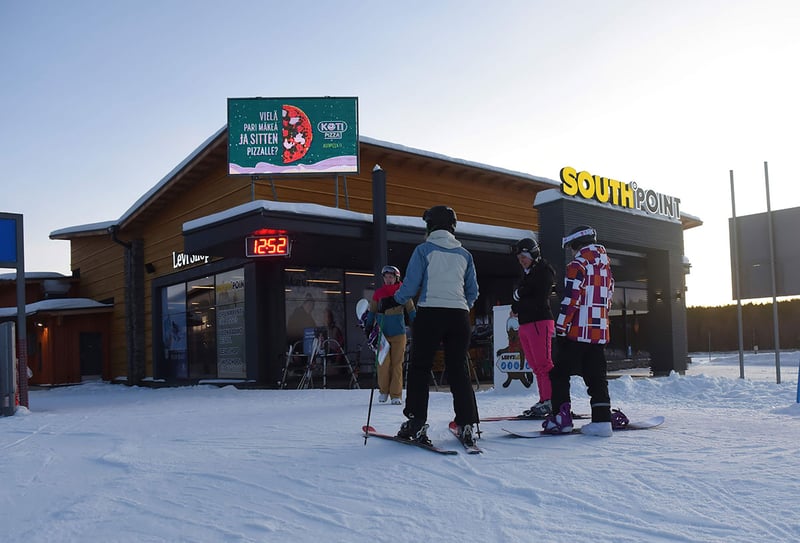 The Finnish forestry administration Metsähallitus has launched a TOBE Low Carbon project that promotes ecologically, socially and economically sustainable tourism in the Pallas-Yllästunturi National Park. The project includes long-term plans to minimize the carbon footprint of the national park and the surrounding area. Levi Ski Resort is one of the six companies closely involved in the project.

8. EVERYTHING BEGINS WITH COOPERATION

We have our own environmental team tasked with ensuring that our ambitious environmental programme is implemented throughout Levi Ski Resort. The management team of the ski resort and the entire organization are committed to environmental work.

We do our best to protect our Arctic environment. We strive to set an example and contribute to the environmental work of the entire Levi Tourist Area. 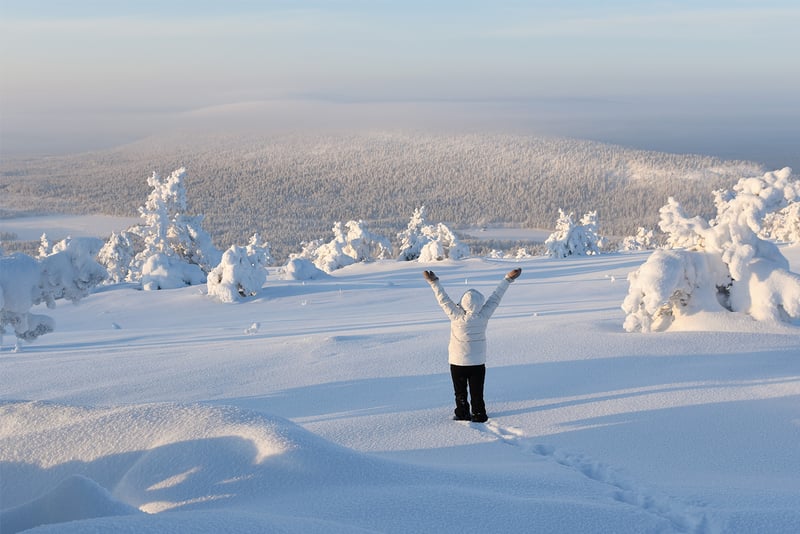 When you arrive at Levi, you too can participate in our environmental work with your own important contribution. Let's take care of the beautiful nature of Lapland together!

Read more about our environmental work at www.levi.ski/environment, and share your own environmental efforts with us in social media under the hashtag #sustainablelevi!